It’s been nearly 20 years since my affinity for swimming with large ocean creatures started. From the first time I saw sharks in the wild while diving in Australia in 2003, I’ve loved the excitement and awe surrounding snorkeling or diving with marine animals in their natural habitats. Snorkeling with whale sharks in La Paz, Mexico, was no exception.

In fact, “snorkel with whale sharks” was highly positioned on my proverbial bucket list since I first heard about whale sharks in the early 2000s.

I love the ocean and find the animals living in it fascinating. You see these beautiful creatures on Planet Earth or in aquariums, but being in THEIR space in open water is an interaction on a whole other level. From my experience, they don’t care you’re there, which is good, right? Of all the sharks, turtles, rays, sea lions, penguins, eels, fish and other creatures I’ve dived or snorkeled with in multiple continents, they are perpetually indifferent to me.

But back to the majestic whale shark. The “gentle giant” of the sea. Feeding almost exclusively on plankton and small fish, they pose no threat to humans. They don’t even have teeth. Not a speck of intimidation comes from them except for their size – the average whale shark is 32 feet long.  Unsurprisingly, whale sharks look like a gorgeous combination of a whale and a shark. Some of the best places to spot these beauties are the Philippines, Australia, Honduras, and Mexico. Whale sharks are only in La Paz from November to April.

There are multiple operators that will take you snorkeling with whale sharks in La Paz. I chose Cabo Shark Dive for one main reason – it was the only company I found that offered an underwater photographer and all the photos included in the price. This was important because I wanted to document the experience, but also fully enjoy the whale sharks without having to worry about taking photos.

I give Cabo Shark Dive a five-star rating. They check all the boxes for knowledgeable and friendly staff, clear communication, and safety and respect of the whale sharks. They get bonus points for serving a delicious fish taco lunch that tasted like it was made by a Mexican mama.

These whale shark tours are not cheap. We paid $210 USD per person. Cabo Shark Dive’s success rate of seeing sharks is more than 90%. If you don’t see any, their policy states you can go again for 50% off.

Getting ready to “jump”

Cabo Shark Dive picked us up at 6:45 a.m. The authorities in La Paz only allow 14 boats out in the whale shark area at a time, so it was important we arrive early enough to be among the first 14. The drive from our resort (Dream Los Cabos, between San José del Cabo and Cabo San Lucas), was just over two hours.

Upon arrival in La Paz, we suited up with wet suits and fins. We then walked across the street to the La Paz pier to board our boat with a group of eight other whale shark fun seekers, our guide Raul, photographer Miguel, and boat captain. It was a sunny, 23 degree January day.

As we ventured on the short ride, Raul told us everything we needed to know for a successful swim with whale sharks. Dos and don’ts, how close we could get, that we’d likely only see one at a time (they don’t travel in pods), and all the safety precautions. He told us the whale sharks we would swim with are “juveniles” – younger ones that aren’t fully-grown yet. It took about half an hour of trolling around until we found our first whale shark. Here we go!

Side note: nothing is done to “attract” the whale sharks here. Operators do not track them or throw food in the water. There are about 100 whale sharks in La Paz from November to April and they are easy to spot when they come up for air, or by their large, dark gray outline at the surface of the water.

There are three amazing things that surprised me about swimming with whale sharks:

There was one negative aspect about this experience:

Only four people were allowed in the water with each whale shark at a time. This made it ideal for two people to swim along each side of the shark. Considering how big they are (the ones we saw were all around 20 feet long), I felt like I was the only one swimming beside these magnificent beasts. CAN YOU IMAGINE HOW AWESOME THAT FELT?

The first shark didn’t stay at the surface too long, and once it went deeper, it looked like a gray blob due to the visibility. I was excited but not fulfilled. I needed more whale shark in my life.

After everyone had a chance to swim with the first whale shark, we went in search of more. It didn’t take long to find another, and this one was bigger and more chill.

Whale shark number two was my buddy. I’m sure the friendship wasn’t reciprocated, but I was right along beside her (him?), getting as close as I could, swimming along in awe of her beauty. She gracefully glided along the surface for minutes, with a big tribe of groupies with her – tons of little fish along for the ride, slurping up any leftover plankton that my bestie missed. This is common, and it was darn cute.

After a good five or more full minutes of swimming alongside my new friend, I was called out of the water for the other group to take their turn. Now VERY satisfied with this experience, I knew there was still more whale shark fun to come.

The water temperature was pretty chilly. We had wetsuits, but it was only about 72 degrees – roughly what my cold Canadian lake gets to in the summer. By the end of my jump with the third whale shark (including going in twice with whale shark two and sitting on the boat soaking wet in between), I was cold and my fingers were numb. I get cold easily though, and Nick was fine, so warm blooded humans need not worry.

Whale shark three didn’t stay at the surface as long when I was in with it. But I still got to swim alongside it, admiring its features from close proximity.

On this jump we also saw bottlenose dolphins popping in and out of the water!

Lunch and return to Cabo

After a couple hours of ensuring everyone had their fill with the whale sharks, we headed back to La Paz. En route Nick and I chatted with Miguel about the different types of sharks you can safely swim with in the area (mako, blue, hammerheads, and more). He told us about some other excellent areas to snorkel in the Cabo area, namely Cabo Pulmo Marine Protected Area. These tours will be on the list for our next trip to Baja Mexico.

A tasty spread of fish tacos with authentic sauces awaited us for lunch. They also gave us a bagged lunch at the same time, which I thought was weird. We had just the right amount of time to change, eat, and chat about our experience before getting back in the van for the return journey to Los Cabos. It was time for a van nap after a crazily fulfilling day. Back at Dreams Los Cabos, Nick and I sipped mojitos with the rest of our family in celebration of a successful check off the bucket list.

If you’re worried about the cost, cold water, or long drive from Cabo, throw your concerns aside. This is a once-in-a-lifetime experience you will not regret. Cabo Shark Dive sent me more than 200 photos of our tour afterwards. It was great to have a large selection, especially because of the low visibility in the water.

You only live once. Experiences like swimming with whale sharks are one of many that make life worth living… and loving.

Love snorkeling with amazing sea creatures? Check out my blog and video about snorkeling with spinner dolphins and giant manta rays in Hawaii, or abundant marine life in the Galapagos Islands. 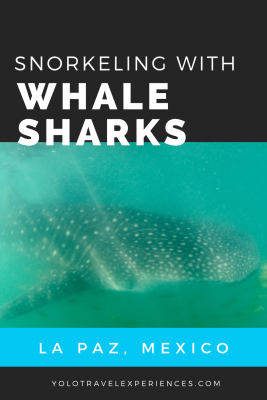 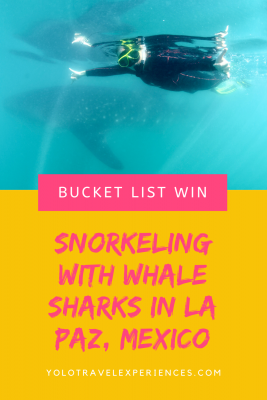