What to eat in Japan 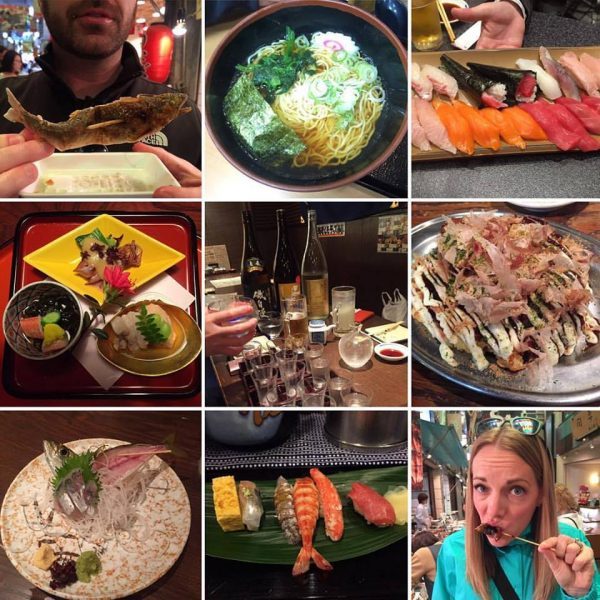 Someone once asked me, “Where is the place you’ve travelled with the best food?” My answer? Japan. I loved almost everything about Japan, but the food really stole my heart, hence the reason I’m writing about it before anything else from our trip. So, if you’re wondering what to eat in Japan, the short answer is: EVERYTHING.

While in Japan, we were on mission: eat Japanese food for every meal of every day. While we only stuck to it 90% of the time (because some mornings you just want a coffee and croissant instead of green tea and gyoza), we sampled some pretty freaking amazing and fresh fare. So fresh, in fact, that once it was still alive on our plate…

How ’bout that sushi?!

Of course sushi was the first thing we wanted to eat upon our arrival in Tokyo (by the way, exploring Tokyo is listed in my Top 10 YOLO travel experiences, check it out). We found a highly-rated sushi restaurant on Trip Advisor – Sushizanmai Higashi in the Shinjuku area – and headed there. The line up was long, so we succumbed to sitting in the smoking section to get in faster (gross, I know).

The verdict? Clearly it was delicious. Can I say it was HANDS DOWN way better than good sushi in Canada or other countries? No. But what surprised and delighted me the most was the different grades or cuts of fish quality and the difference in taste and texture between them. The various kinds of bluefin tuna – Akami, Chutoro, Otoro – I’ve rarely seen choice like this outside Japan, although I’m sure it exists.

We ate sushi many more times on the trip. We had beautiful sushi at the massive Tsukiji Fish Market in Tokyo (no idea what it was called…). When I wanted to try sea urchin our guide politely said, “Uhh, I don’t think you will like it,” with a huge smile. It was OK – a curious texture indeed. We also did the good ol’ conveyor belt sushi a few times, which is quick and convenient. I couldn’t bring myself to try the horse nigiri, although if someone dared me and I had had more to drink I probably would’ve.

But I have two FOODIE HIGHLIGHTS from our trip to Japan that I need to inform you of. The first is the food and drink tour we did in Tokyo through Oishii Tokyo Food Tours. We chose the Aka Chouchin (red lantern – symbol of the izakaya, a Japanese pub) tour in the district of Ebisu, described as a “huge theme park of food.” SOLD.

Part of figuring out what to eat in Japan involves letting locals decide for you. This tour involved five restaurant/izakaya stops with different types of Japanese food and drinks at each one. This foodie was boiling over with anticipation for the treats I would encounter!

Unfortunately, I have no idea what these restaurants were called. They all had Japanese only names and signs, and when I emailed Oishii to get the names, they said they can’t tell me because “the point of joining our tour is guests can experience visiting places where locals hangout. So if we disclose the names many people visit their own so we lose the local feeling.” Fair enough. I guess you’ll just have to book the tour!

The first stop was for yakitori – Japanese barbecued meat skewers – and Japanese beer, Yebisu being the primary choice. Nothing like some succulent barbecued meat, so this was a great start.
The second was sushi and sake at a classy sushi restaurant with a huge fish tank; a nice addition to the restaurant decor, I thought. But those fish weren’t for decoration.
The various sake tasters loosened us up while we munched on fried fish fins, which were DELICIOUS, like better than chicken wings delish. We then sampled some beautiful sashimi before our guide, Kanako, said, “Would you like to try some really fresh sashimi?” Of course, we said.
We watched the chef scoop a mackerel out of the tank, slice it open, cut the “sashimi” parts into pieces and leave the rest of the poor scaly little guy, head and all, in a fancy skewered decorative manner on the plate. When placed in front of us, he hadn’t quiiiite made it to fishy heaven yet. Half of me was salivating at how fresh the sashimi would be, and the other half wanted to become a vegetarian on the spot.

SAKE SIDE NOTE: When I choked down the random sake on Japan Airlines, I was wondering how I was going to be able to drink it in Japan, but like wine, there is a very wide range of sake tastes. Hands down the best one I had was by Bijofu at an izakaya in the Golden Gai district of Tokyo, this one:

The next stop was for Okonomiyaki and Shochu. Okono-what? Yeah, I had no idea either. Okonomiyaki is a Japanese savoury pancake containing a variety of ingredients (middle row, far right in main post photo) originating from the Kansai and Hiroshima areas of Japan. It was savoury all right. I don’t really know what was in it other than deliciousness, so just try it when you’re there. We also sampled various other izakaya dishes and quite a nice green apple shochu, a Japanese distilled liquor made from rice, barley or sweet potatoes. Another night I ordered plain shochu, I was not a fan. I choked it down like cheap whisky before handing it over to the hubs.

By the fourth stop our bellies were getting full. The ramen place we were meant to go to was too full so we entered a modern, sleek udon establishment. Udon is noodle soup with thick noodles, similar to Shanghai noodles. Let me tell you – EVERY bowl of soup I had in Japan was fantastic! From this udon to the fancy ramen to the ramen at the hole-in-the-wall shop where you order from a vending machine. Like seriously good flavour.

The last stop was for ice cream, where we sampled flavours like matcha green tea and cherry blossom. Although we could barely fit it in our stomachs by this point, we made an exception. What a night of foodie bliss!

My second foodie highlight of the trip was the 11-course Kaiseki meal we had at the Hiiragaya Ryokan in Kyoto. What are these words I say? Kaiseki translates to Japanese haute cuisine; the fancy stuff. A ryokan is a traditional Japanese guest house with Japanese baths and tranquil gardens, where you sleep on the floor on tatami mats.

Part of our stay was an 11-course meal. I’ve included a photo of the menu, with the crazy intricate detail of every course, and words that show I had no idea what I was eating at times. Again, figuring out what to eat in Japan revolves around trusting that something like a pre-set menu at an expensive ryokan will be exquisite, and you should try each course even if it looks scary.

This “meal” was more art than food. But it’s not like it looked prettier than it tasted. It was phenomenal. And healthy, with a focus on fish and vegetables. As we sat on the floor, wearing our traditional Japanese robes while we ate, we analyzed each morsel of food, eagerly awaiting the next course. From Kisslip Cuttlefish to Butterbur Sprout to Toasted Whitebait, we tried it all. 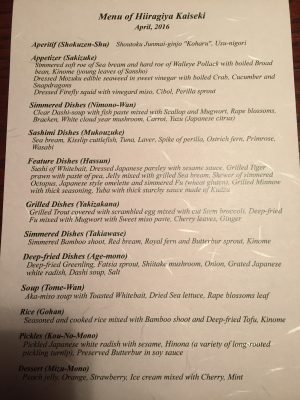 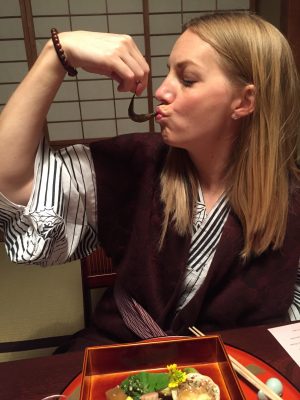 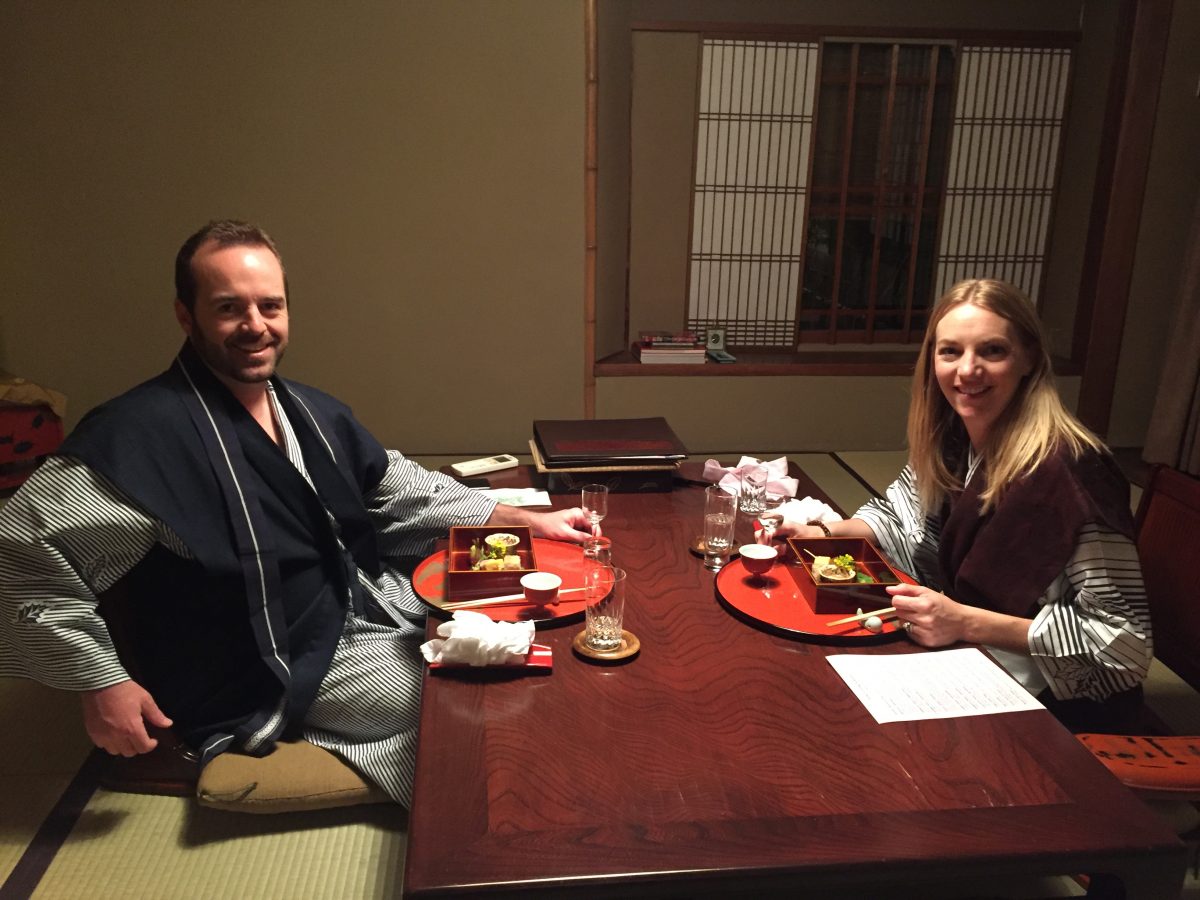 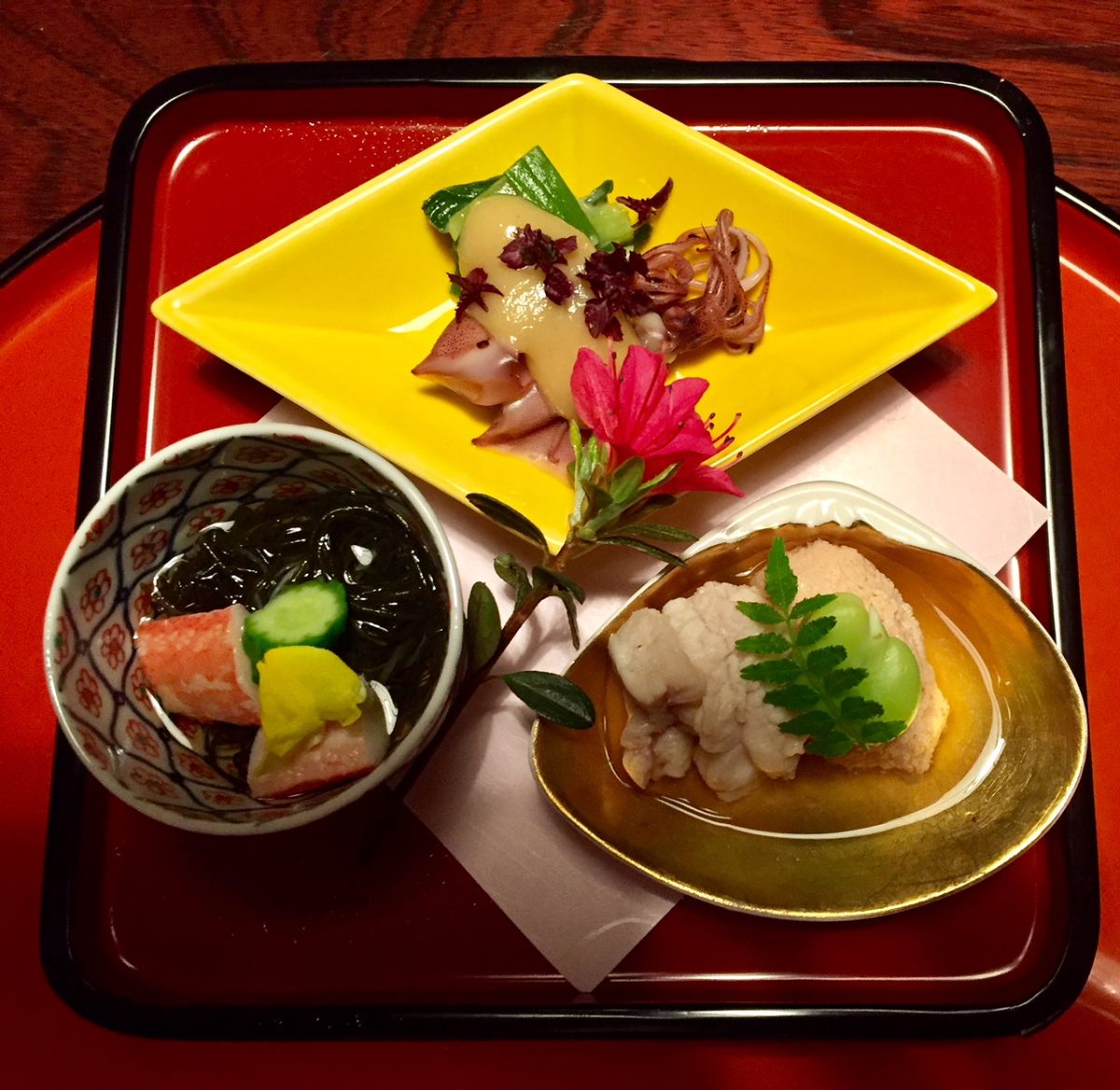 I could go on and on about the food in Japan, but I hope I’ve helped you figure out what to eat in Japan and enticed you foodies out there that Japan has some of the best food in Asia. Trust me, you will be saying an enthusiastic “arigato go-zai-mas!” when leaving most, if not all, dining establishments.

Looking for more on Japan? Check out these articles on Japan’s best accommodations, the Best things to do in Kyoto, or this Tokyo travel guide. 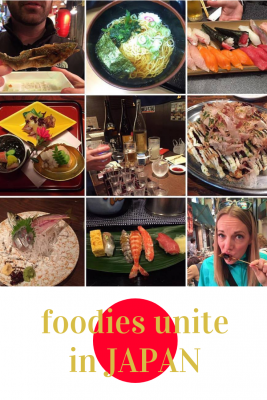 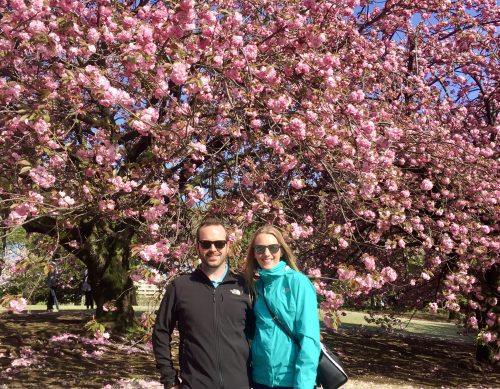 4 days in Tokyo: 8 amazing things to do 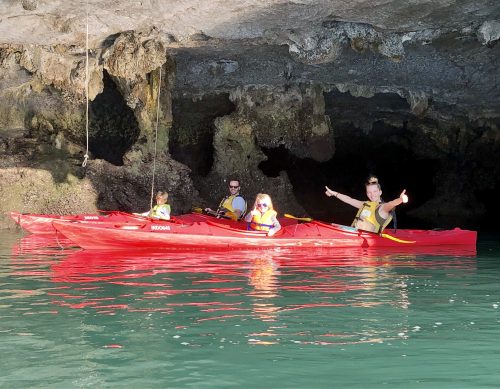 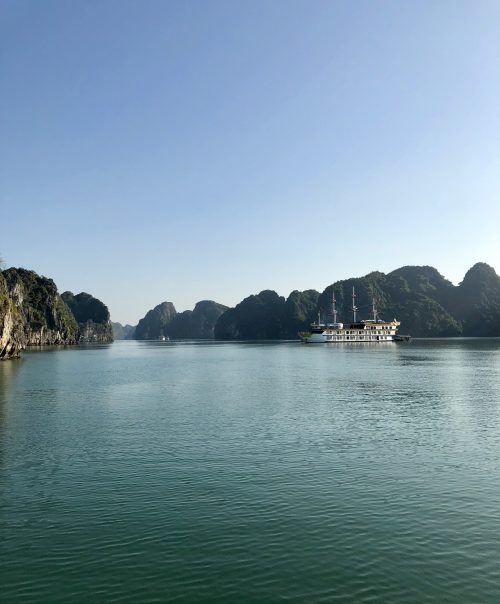 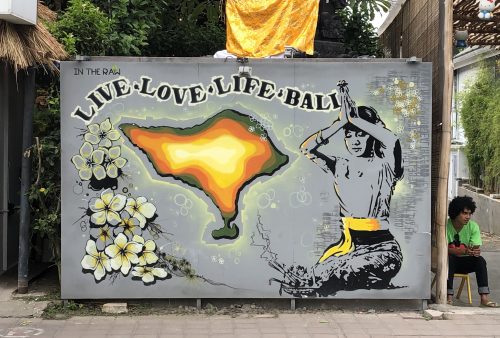 10 Days in Bali with Kids 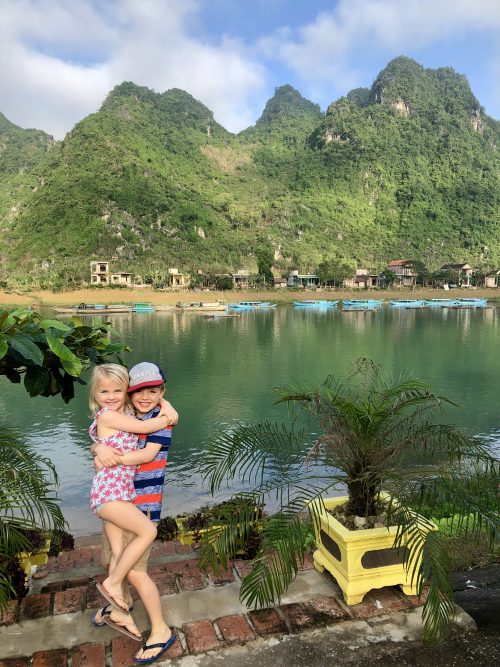 What to do in Phong Nha National Park, Vietnam with kids